This little cashbook not only tells me a lot about my father’s bachelor days, but also, here and there, glimpses of Schenectady and Scotia life in the early 20th century as seen by a young man.

Mathias, as the Norwegians called him, quickly became Matt to the Americans. He started with cash on hand July 15 1904 of $16.43. The first paycheck was $17.04 and his second $12.50. Apparently all his work was piecework, since his weekly income varied throughout the cash book. His expenses for the two weeks were a modest $11.67. Room and board $7, toll over the bridge 1 cent, lunch box 25 cent, underwear $1, necktie 50 cents, bicycle stall rent 14  cents, apron (for work) 25 cents, envelopes and stamps 35 cents, whet stone 10 cents, Mother $2, newspaper 7cents.

As the record progressed, the entries gradually changed from Norwegian to English. He became more affluent, buying cigars, cigarettes, beer, ice cream, candy, gum, Moxie, nuts…and fruits like grapes, peaches, melon, and especially bananas.   His lifelong hobby of photography was indicated by many purchases of film and film development.

MKK must have had a good appetite, because his room and board was originally $3.50 and went up to $4 and then to $436. And yet he had a lot of snacks. Within the area, he explored new places by trolley car: Amsterdam, Troy, Cohoes, Ballston Lake. His first trip was Saratoga with a fare of 65 cents and the racing 75 cents.

Coming from a remote farm area in Romsdal, he was fascinated by the theater. During his first winter, he saw Fay, From Rags to Riches, Checkers, Letty, the Crimes of New York, Faust and many others identified only by date, which could no doubt be found in newspapers of the time. He attended the Dancing Academy, costing $5 and from then on attended dances at 50Ë. Vaudeville, Luna Park, picnics, 17th of May celebrations…all were part of his non-working life.

Judging by his purchases, he was somewhat of a dandy. He, necessarily had his collars, cuffs and aprons laundered, his pant pressed, his shoes repaired. He bought an overcoat, a couple of suits (one of which was black, perhaps for dancing?), suspenders, gloves, handkerchiefs, and socks. (Many, many of the latter two). Every season he bought a new hat, and he sported a walking stick. Every once in a while, he had a shave for 10Ë.

His church going was sporadic, and his contributions very low. He liked witch hazel which he had a hard time spelling but an easy time using. He had never heard, “Cleanliness is next to godliness” because he paid more (25 cents) for a public bath. 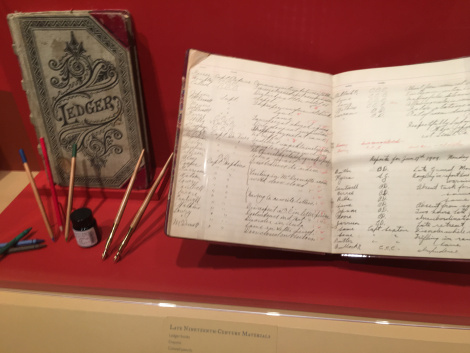 After working in Chicago and then in a logging camp near Medford, Wisconsin, he returned to Scotia, New York to work for General Electric Co., his lifetime employer.

This site uses Akismet to reduce spam. Learn how your comment data is processed.