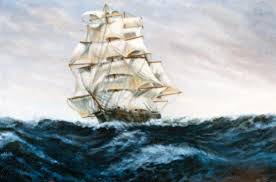 My great grandpa-Johan Alfred Olsen-died at 84 in 1960, the year before I was born. However, many stories about his unique personality were related to me by family members over the years.

He was born in Arendal at a time when the tall sailing ships traveled all over the globe from that seaport. Timber and fish products were shipped in the colorful square-rigged ships. His grandfather had sailed around Cape Horn and earned the right to wear golden earrings–a mark of manly respect in those seafaring days. Norsk ships would pile on extra sail for added speed carrying grain from Australia to Europe. Being first in port meant extra pay for the captain and crew.

As a young lad, he scampered over the wooden decks of the vessels anchored in the fjord with his younger brother. Johan soon learned the nautical terms of the intricate rigging and ropes that secured the enormous sails to the masts. One time he and his brother were playing on some icy logs tied up in the har bor. Johan slipped and plunged under the surface. His head kept bumping the logs as he tried to rise. His brother quickly spotted his blond hair between the timber and yanked him up by his scalp, saving Oldefar from a watery grave.

On another occasion, the two boys were suspended by their hands under the town bridge. King Christian was visiting Arendal and the boys wanted “a good look”. Walking across the span, the King inadvertently stepped on Johan’s hand.  He was very proud of this “royal connection ” even into his old age.

He learned the carpentry trade and married a local girl named Olga .  They soon were blessed with two daughters .

Great Grandpa decided that opportunities were better in America and emigrated alone. He found work in Brooklyn with the dockbuilders, constructing heavy oak storage bins for coffee beans. These bulk containers were located in the hollow foundation of the Brooklyn Bridge.

Eventually he sent for his young family and as the demand for residential housing escalated, he began house building in Bay Ridge.

His carpentry skills excelled, and Johan was assigned to complete trim work and inlaid mahogany designs. Johan decided to start his own carpentry business. His specialty was church work such as baptismal fonts. Local churches such as 66th Street, Sunset Park and Bethelship featured his craftsmanship. He would purchase rare and expensive wood originating from Africa and South America to fashion these venerated objects. He served as Treasurer at Sunset Park M.E. Church for 40 years. The collection receipts were tied in rubber bands and stored in cigar boxes at home until the bank opened.

As a hobby, he crafted sailing ship models in his basement on 49th street. For exactness in ship specifications, he would send to Scotland for the builders blue prints. Some of these models were donated to the Seamen’s Church upon his death. Occasionally he accepted commissions for a specific model. The president of the Moore-Mac Cormack Line placed an order to duplicate one of their early sailing ships. Nordisk Tidende featured him in an article concerning his ship models and numerous maritime photographs.

Before pickup trucks were manufactured in Detroit, Johan built his own. He would order a Model T Ford Roadster and remove the deck lid. A sturdy  wooden box would be installed to transport lumber to the job.

Apparently he had an eccentric nature at times. He ordered a new Ford but insisted on the original floor pedal transmission. He didn’t like that new model “with the stick in the middle of the floor.”

His charitable interests included the Norwegian Christian Home. Several hand carved “kubbe stol” with rosemaling painting were donated and serve the residents to this day.

His younger brother, John Olsen, served as Chairman at the Home for many years. He enjoyed viewing the annual Lifeboat Races held in the Narrows amongst the merchant fleet. It seemed that the Bergensfjord crew consistently beat the competition.

As I meditate on my rich Norse heritage, it wouldn’t be complete without my dear Oldefar–Johan Alfred Olsen.