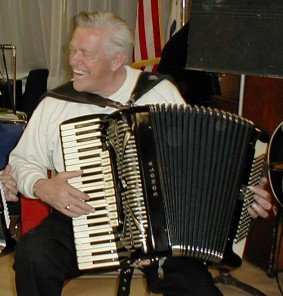 Shortly after New Year’s, January 1, 1930, about three months after the infamous stock market crash of 1929, my mother made some ertersuppe and corned beef for my hard-working dad and, while trying to ease the stress of the serious financial times, she reassuringly smiled at him. Nine months later, I was born at the Norwegian Methodist Hospital on Fourth Avenue.

My older sister, Florence, and I were born into the wonderful Scandinavian subculture of Bay Ridge, Brooklyn. First living at 51st street, between 7th and 8th Avenue ( a block away from the church where Mom and Dad were wed). We soon moved to 41st street, around the corner from Imatra and Finn Hall, and close to Sunset Park.

As we grew up, my sister and I quickly got into the social surroundings of Bay Ridge: the ice cream parlors, the Ritz and Berkshire movies, sleigh riding in Sunset Park, Mom’s great Norwegian Christmas cookies, going to Sunday School and Confirmation classes with the many Norwegian first-generation American children at Sunset Park Methodist Church on 45th and 7th Avenue. And not to forget the many Juletrefests in Bay Ridge.

My Dad was a self-taught “knappespill” accordionist, and an active member of Norsemen Lodge, Free and Accepted Masons. My folks also were active in the Sandoya Club (Sandoya, a pristine island just outside of Tvedestrand). Club members worked hard to accommodate “krig” sailors from Sandoya when in port, and help their families who remained on Sandoya during World War II. When the war broke out, Dad left Larsen Baking Company (he drove a delivery truck) and joined Sullivan Shipyard, working as a Rigger-Snapper, repairing war damaged vessels that got back to New York Harbor.

When I was 10 my folks had me follow in my Dad’s footsteps by sending me for accordion lessons. These studies took me to the famous George Naargard, whose lessons were sadly interrupted by the war and from which he never returned. I then signed up at the Olzen School of Music and spent six years learning to play semiclassical and popular music. My teacher was the well-known Walter Nilsen (not related), a one legged master of Jazz. At 22, Nordisk Tidende Editor, Carl Soyland, took me to Baltimore, Md., to play a concert.

Thankfully, World War II was now over and by May 1947, my mother, two cousins and I sailed to Norway to visit her family on Sandoya and my father’s family in Sandefjord. By the time we returned home in November, I even thought in Norwegian.

On the return trip from Norway, I befriended the now-famous accordionist, Walter Eriksson, and assembled an extensive library of Scandinavian dance music. Then I started to play for the large mileu in Bay Ridge. ..i.e. all the sons of Norway and Vasa Lodges, private clubs and private parties. As a young man, I also belonged to the Norwegian Folk Dance Society, Bondeungdomslaget, and the Norway Ski Club. Some of the “big” events in my musical life were: I replaced Karl Sabel as the accordionist in the popular “SKOAL TRIO” and also became a member of the all accordion concert orchestra called “ ACCORDIONATA”… there performing with such world-class accordionists as Svend Tollefsen, whom I had the honor to work with on many occasions.

The Korean War came soon upon us, and from 1951through 1953, I served on active duty with the United States Navy. Upon coming home, the cultural music of Scandinavia in Bay Ridge again kept us happily busy. We couldn’t count the many honorable mentions coming fro Nordisk Tidende “Around Town” reporter, John Yauchstetter.

By then, however, the planning and construction of the Verrazano Bridge, from Bay Ridge to Staten Island started, which literally cut Bay Ridge in half. History shows that a huge number of Scandinavians made their exodus from Bay Ridge and the colorful Scandinavian presence there, faded away. I too, moved from Bay Ridge to Lake Telemark, New Jersey, leaving National City Bank and beginning a career in Rocket Research and development.

Looking at Bay Ridge now, I warmly acknowledge the remnants of Scandinavian culture still there, wanting to dance the familiar waltzes, schottisches, polkas and hambos. Thanks to the Danish Club on 65th street, the Sons of Norway Lodges… Nansen on Staten Island and Noreg in New Jersey. Special thanks go to my lodge Norbu , Lake Telemark, for letting me assemble musical friends from Norway and Sweden to play on their float in the 17th May Parades. Thanks also to Vasa Lodges having affairs at Solhem Gamle Hjem on Staten Island and Vasa Park in Budd Lake, New Jersey.

I, with humble feelings, still find myself “cranking up” my accordion to play for these “squarehead” diehards. With nostalgia, I often wave back to friends of old, who had caught me playing with the Scandinavian Accordion Club of New York (playing first accordion on Walter Eriksson big band arrangements), or as accordionist in the Walter Eriksson New York Society Big Band, now led by Walter Eriksson, Jr., and last, but not least, as “The Norwegian”….with old pal, Bill Nostrand. Bill and I have supported the Scandinavian Fest from it’s inception, and now, attracting thousands at waterloo, New jersey, we musically greet all entrants at the gate.

Now, at 69 years of age, I take this opportunity to say “Tusen Takk” to all performers and all the many hosts, over the past 50 years, for the good clean fun of Scandinavian musical heritage in dear old Bay Ridge. It was a wonderful place.

And to my departed Mom and Dad, the immigrants who came over in hard times….who worked hard, laughed and loved hard, and like their many counterparts in Bay Ridge, did not soil their National dignity by having their hand out, I hail.

And PS…Thanks, too, Mom for all of those beautiful hand-knitted lusekoftes.